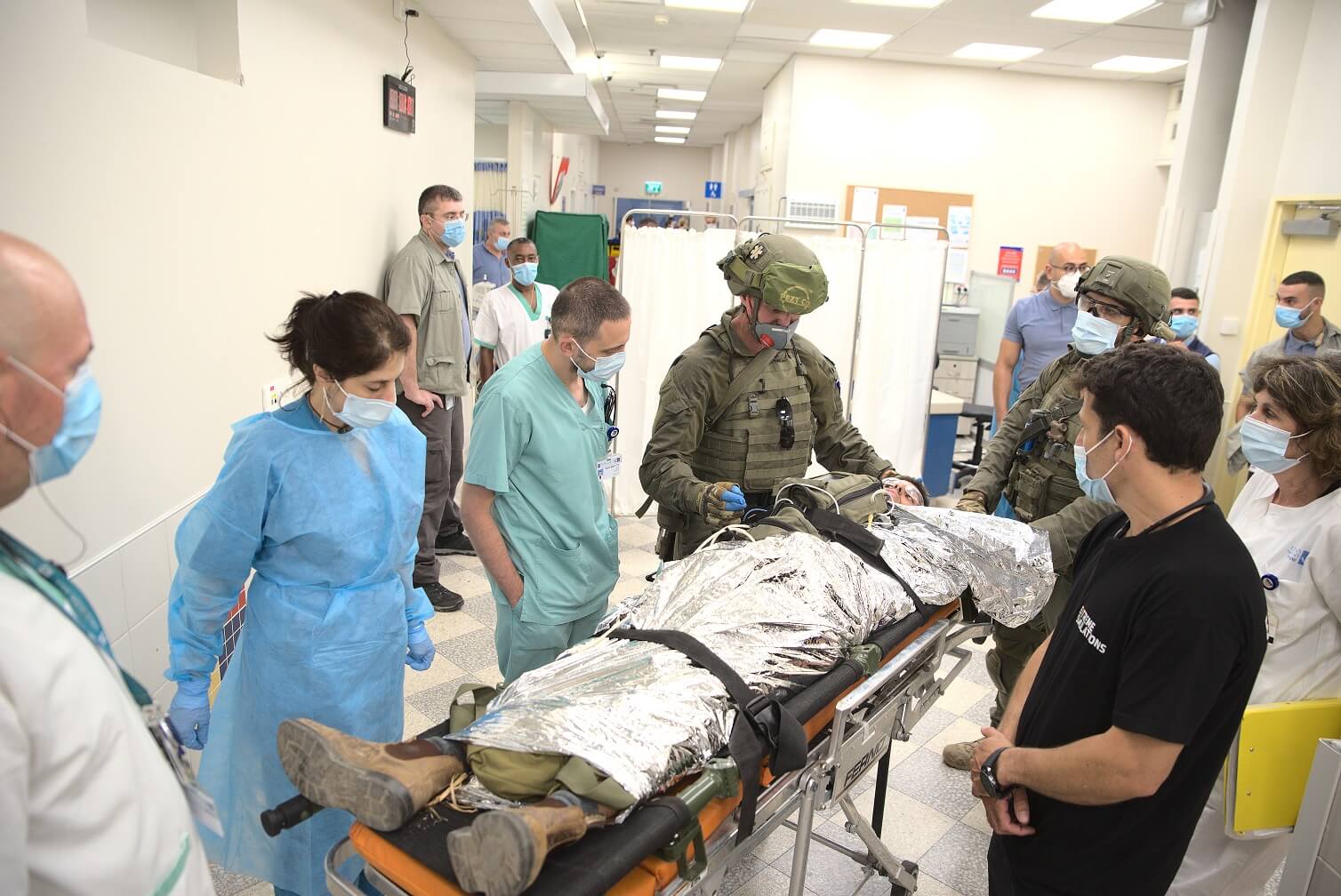 You may be wondering why, at Extreme Simulations, we practice different steps in handling multiple casualty incidents and correlate them from the first minute of the rescue mission up to hospitalization.

Loss of information due to separate trainings within an organization

In an organization, different sections of the organization take part in trainings separately and not as a whole.

What is more, organizations that are meant to collaborate in case of an extreme incident are also training separately.

This makes them unaware of the problems that arise in the interfaces between the sections or organizations.

Analyzing true events instead of learning from exercises alone teaches us that there is a gap in conveying relevant information about the victims in the various stages of treatment and evacuation, inside and outside the hospital.

The problem grows as the operational difficulties increase (such as difficult terrain, rescues, enemy) and as the number of casualties increases.

The problem concerns not only the aspect of medical care but also many non-medical aspects, such as the ability to provide information to the families of the victims.

Two injured soldiers were evacuated to the same hospital during an operational incident.

The forces on the ground were aware of both casualties, including their names. At this stage, the two sounded soldiers were given prehospital medical treatment, including drugs.

The soldiers were then evacuated from the scene of the incident by an evacuation unit.

A helicopter then took them from the evacuation point to the hospital.

At each stage of this transfer, more and more information about the wounded soldiers was lost. The state of urgency led to information being poorly documented, so much so that, upon the soldiers’ arrival at the hospital, no one knew who was who of the two.

Even more concerning was that the medical staff did not have access to any information regarding the soldiers’ previous treatments (such as drugs, anamnesis, and ext). You can imagine how such a situation would make it difficult for the hospital staff to treat the wounded. Loss of such information can lead to poor treatment and increases the chances of medical errors.

But beyond the medical challenges, passing the information over to the soldiers’ families was practically impossible. They had heard the news about the incident and were waiting for information on their health.

However, no one could tell them about the medical condition of their loved ones…

What causes problems in transferring information?

Below is a selection of the problems and difficulties in transmitting information, as well as solutions we, at Extreme Simulations, are familiar with. We can help organizations improve their performance in these areas to visibly enhance medical and operational care.

Problem: in a multi-casualty incident, the documentation is pushed aside

Medical staff (which is a bottleneck) is busy administering treatment to the wounded and does not deal with documentation. This is understandable, as the medical staff is always trying – especially in a multi-casualty event – to give maximum care as quickly as possible.

However, when registration procedures are not sufficiently assimilated, the registration is pushed aside, and sometimes out.

Problem: The phenomenon of “shouting in the air”

What we often see during training exercises is that medical professionals distribute instructions for performing procedures, administering medications, and so on.

The instructions are thrown in the air, but no one knows who should implement them or if they are performed at all.

Problem: Lack of a connection between the wounded – the story, and difficulty in identifying the wounded

We were talking about the instructions being thrown in the air – but even when they are documented, very often the documentation is separated from the patient.

Once that happens, there is no way to reconnect the documentation papers to the patient. There are situations when people have similar names, so even when you manage to find a list of the wounded and check their treatment, it may still not be clear who is who because of the name similarities.

Problem: Shortness of time and urgency

Imagine you are in an extreme situation; you have to save someone and you have to do it fast. This leads to extreme stress and involuntary prioritization of procedures. Especially in a dangerous area, you may forget to update the rescue team about the patient’s status or treatment because all you can think about is how to get them out FAST.

Many evacuation vehicles (especially the military and especially helicopters) are very noisy, and so information transmitted orally is distorted and changed.

Problem: Lack of common language regarding the injured in a multi-casualty incident

This happens when the wounded are not marked.

Speaking of marking, another mistake that can occur is to call the injured by their diagnosis. For example, referring to a patient as “the one with scratches on their hands” is incorrect and dangerous, as it establishes a diagnosis (most often incomplete) and may cause no further tests to be performed.

Hospital systems are based on the name reception of a wounded person.

Many times, the absorption of an anonymous person creates difficulty.

We see hospitals struggling to absorb a large number of anonymous wounded. This creates difficulty in removing stickers, difficulty in absorbing systems, and performing parallel operations outside the systems. Even setting a schedule for feeding the wounded and choosing their menu can be a challenge when we’re talking about multiple anonymous patients.

Problem: Lack of sufficient training, especially in transferring an injured person from level to level

The common procedure is to perform training sessions for each department separately or for each team separately.

This is a mistake.

The problem of the loss of information occurs because remote parts of an organization have to work together in an environment they are not familiar with, under extreme stress and unique circumstances.

Inter-organizational exercises are a rarity. The interfaces between field care, evacuation, and hospitals are hardly ever practiced.

One thing that is always true is that in every event there IS someone in charge of the medical records (regardless of whether or not there is also an advanced digital system).

The solution starts with awareness.

In this case, the solution is mainly related to proper organizational conduct.

The process of finding solutions is best to be identified by the trainees. This is possible as a result of quality practice/training (in other words, training that best simulates a real event). The training session should include a set of different scenarios if-this-then-that; a maximum number of combinations should be set to consider all the things that might go wrong during a real-life event.

Additionally, other solutions include:

Request a quote for a multiple casualty incident training now

Learn more about our training

What to Expect from the Simulation of a Real-Life Event

The problem of NOT using realistic mannequins in disaster area training

We use cookies on our website to give you the most relevant experience by remembering your preferences and repeat visits. By clicking “Accept”, you consent to the use of ALL the cookies.
.
Cookie SettingsAccept
Manage consent

This website uses cookies to improve your experience while you navigate through the website. Out of these, the cookies that are categorized as necessary are stored on your browser as they are essential for the working of basic functionalities of the website. We also use third-party cookies that help us analyze and understand how you use this website. These cookies will be stored in your browser only with your consent. You also have the option to opt-out of these cookies. But opting out of some of these cookies may affect your browsing experience.
Necessary Always Enabled
Necessary cookies are absolutely essential for the website to function properly. These cookies ensure basic functionalities and security features of the website, anonymously.
Functional
Functional cookies help to perform certain functionalities like sharing the content of the website on social media platforms, collect feedbacks, and other third-party features.
Performance
Performance cookies are used to understand and analyze the key performance indexes of the website which helps in delivering a better user experience for the visitors.
Analytics
Analytical cookies are used to understand how visitors interact with the website. These cookies help provide information on metrics the number of visitors, bounce rate, traffic source, etc.
Advertisement
Advertisement cookies are used to provide visitors with relevant ads and marketing campaigns. These cookies track visitors across websites and collect information to provide customized ads.
Others
Other uncategorized cookies are those that are being analyzed and have not been classified into a category as yet.
SAVE & ACCEPT
Powered by